GMO-Z.com RUNSYSTEM continues to be in the Top 50 IT leading Companies in Vietnam 2017

On October 25th 2017 evening, in the framework of the International Conference on Intelligent City 2017 and the 11th Japan IT Day 2017 in Ho Chi Minh city, GMO-Z.com RUNSYSTEM continues to be voted in the Vietnam’s 50 Leading IT Companies 2017 by Vietnam Asscociation of Software and IT service (VINASA).

Vietnam’s 50 Leading IT Companies are organized annually, starting in 2014 to promote cooperation, selection and introduction and recognization of outstanding  IT Vietnam enterprises to partners, potential customers in the country as well as over 100 countries and regions around the world.

This year, the program was launched in early June, VINASA collected votes and selected 50 leading enterprises with total revenue of 20,676 billion (equivalent to 936 million USD). Beside the improvement in application process, analysis and evaluating development potential these enterprises, the program had made great changes when setting priorities for enterprises engaged in digital transformation, IOT and new technology trends of industrial revolution 4.0. This was the second consecutive year, GMO-Z.com RUNSYSTEM was honored to be the Leading Unit in the field of Software, Solutions and IT Services.

As one of the leading IT companies, over the past decade, GMO-Z.com RUNSYSTEM had deployed thousands of large and small projects in the field, contributing greatly to the overall success of the IT industry of the world as well as Vietnam IT industry.

With a team of highly experienced with deep understanding of cross-section profession, enthusiastic, creative and talented, GMO-Z.com RUNSYSTEM is getting stronger and  stronger asserted its position in IT field. Beside using common programming languages ​​and databases, the company pioneered the application of new technologies with various advanced features. In particular, IOT, VR, AI  were invested in both efforts and finance by the company, promising to bring even more useful software packages products based on this technology platform. 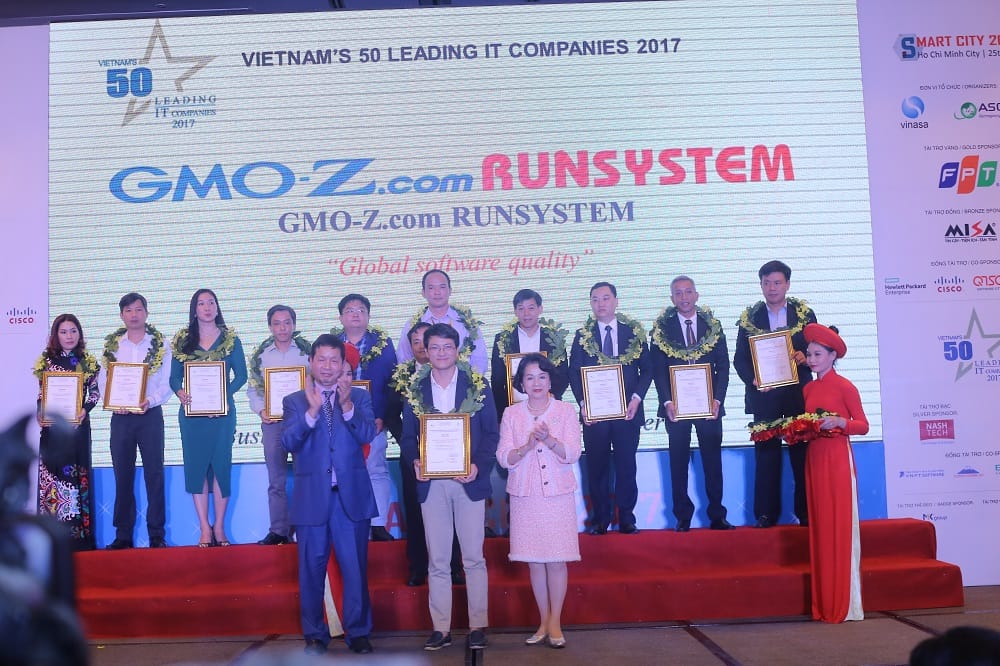 Two consecutive years voted in “Top 50 leading IT companies in Vietnam” was the evidence of the success of GMO-Z.com RUNSYSTEM when being persistent with the core value “We work for your smile “. This also helped GMO-Z.com RUNSYSTEM continue to affirm its position in Vietnam IT field in general, and offshore in particular. At the same time, the award also affirmed the practical value that members of the company managed to bring customers, users as well as members of the company.